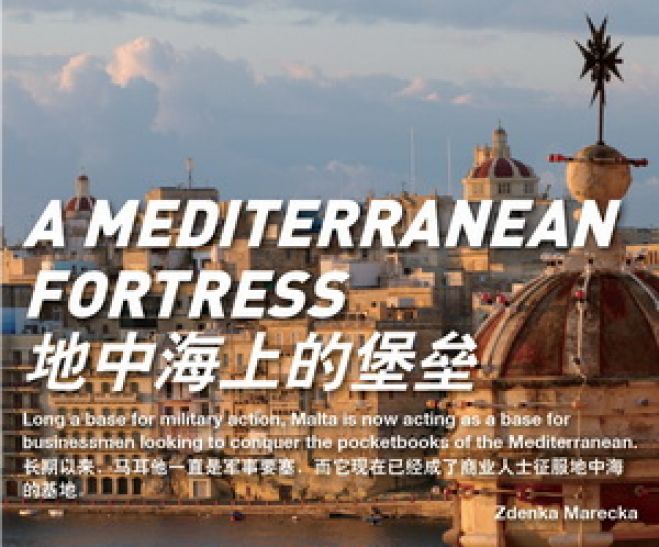 Malta has long been a destination for those looking for a strategic base within Europe.

For 3000 years the Greeks, Romans, Arabs and British coveted this 300 sq. km island off the Southern coast of Italy. Independent since 1964, the country now looks to extend its traditional strategic value to financial services. Offering its friendly shores to those looking for a strategic base to enter European and North African market, or those who need a citadel to protect the long term value of their capital.

Malta has double taxation agreements with over 50 countries, with more on the way. China is one of the more recent to the list, signing a new double taxation agreement with Malta this October. It provides that the retaining tax rate for dividends for a holding of at least 25% of the company paying the dividends has been established at 5% as opposed to 10% under the existing treaty. This agreement was signed almost exactly one year after an Agreement for the Reciprocal Promotion and Protection of Investments.

A double taxation agreement between Malta and the USA will take effect on January 1, 2011. This will give Malta access to the whole North American Free Trade Agreement (Nafta) region which consists of the US, Canada and Mexico.

When Malta entered the EU, it had to gradually abolish its 4% effective tax rate for International Trading Companies' (ITC) and for Maltese Companies with Foreign Income (CFI). This put Malta in good stance with the local community, allowing them to sign their network of DTAs, and pass a flat income tax of 15% on remittances by permanent residence, but the actual effective change to corporate taxation structure wasn't great. Now all Maltese companies have to pay a 35% tax on their net income, however shareholders of Malta holding companies qualify for a full refund of the tax paid by the company on profits arising from "participating holdings" abroad. Furthermore, when dividends are paid by trading companies to shareholders, these shareholders are entitled to claim refunds of 6/7ths of the Malta tax paid by the company, making the effective tax rate 5%.

Maltese imports from China have grown from €62 million in 2004 to €117 million in 2009 while exports have increased from €15.5 million in 2004 to €27 million in 2009. It was in fact the only destination in Europe that expanded its trade with China in 2009. And the island is getting more competitive globally: according to the World Economics' Forum Competitiveness Index, in 2009 Malta's ranking for financial market sophistication had climbed to 13th which means that Malta managed to jump 21 countries in just one year.

Because of its unique location and good infrastructure, Malta is said to be the ideal jurisdiction for those who wish to get access to Europe and Middle East. One such example is Leisure Clothing Ltd (Malta), a Chinese-owned textile manufacturer which has been working in conjunction with Malta Enterprises, secured a contract with Giorgio Armani and is finalizing another with Hugo Boss. Annual exports are valued at between US$ 4 - 6.5 million.

Malta and China are trying to bring more companies like Leisure Clothing to the island. This November a Memorandum of Understanding was signed by Malta Enterprise Deputy Chairman John Scerri and the president of the International Investment Association of Shanghai, Huang Linsheng, which will see Malta offering new investment promotion services to Chinese companies. The International Investment Association of Shanghai will open a regional representative office in Malta which will assist Chinese businessmen and investors in Malta. The Memorandum of Understanding includes exchange of information regarding trade and investment opportunities details concerning collaboration on future promotional activities such as exhibitions or trade fairs. Upon coming to Malta, Malta Enterprise will assist Chinese investors with finding information and will try to set up meetings with suitable partners.

From Malta Freeport you can ship directly to one hundred ports all around the world and the airport offers frequent direct flights to all the major cities in Europe, North Africa and Middle East. Ferry services connect Malta with Italy and North Africa.

The island is also trying to make a name for itself as a tech center, with some help from its preferential regulatory system. Thanks to modern and reliable telecommunication facilities, knowledgeable staff and appropriate legislation, Maltese e-gaming companies service around 10% of world's online gaming market. Malta's efforts to synchronize its gaming legislation with the EU has meant that its 300 online gaming facilities have been able to operate unimpeded.

General technology companies have been jumping on the bandwagon, trying to make use of the large pool of technically skilled workers on the island (the ratio of information technology workers to the general population is the fifth highest in Europe). Recently Hewlett- Packard established two education centers on the island, and Malta's low cost universities are training technology professionals from across the region.

Malta offers scores of other advantages to the would be investors. Assets held by Maltese banks have more than doubled since 2003, as the island's strong asset protection plans have benefitted from negative attention garnered by Switzerland (see Eye On Switzerland). Malta's investment visa policy is generous, and allows property owners on the island access to the entirety of Europe without having to pay any future property taxes. Income taxes can be as low as 2%, and let's not forget that the island just opened Europe's second offshore jet registry (see Special Report).

But the real thing that Malta gives you is access - a strategic base half way between China and North America, where you can gain access to Europe, visa free for you, and tariff free for your goods. A strategic base for you and your business.